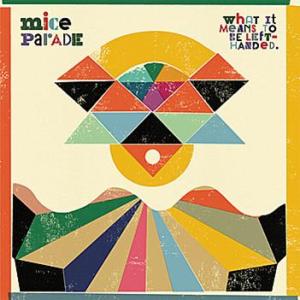 Mice Parade – What It Means To Be Left-Handed
Fat Cat Records
September 14, 2010

What It Sounds Like:  A plethora of soundscapes, from indie rock, tribal jazz, and Spanish guitar picking, all joined together in a magnificent combination of various restrained instruments and tones.

This has been my first experience with Mice Parade, and I have to say, while I may not be rushing out to buy everything they have ever released, it has certainly been an enjoyable first experience.  This band is the brainchild of percussionist Adam Pierce, and while his various rhythms and switches make up the heart of his project (and he does still sing), it is always interesting to hear another vocalist play the part of frontman, or in this case, frontwoman (Caroline Lufkin).  Her tone fits this slightly experimental style perfectly.

The songs on What It Means To Be Left-Handed sound like they have been influenced from every corner of the world, from long lost tribes in Africa to the main drag indie pop/rock scene of New York City, as the first track Kupanda showcases the former, and the second track In Between Times gives us the latter.  Certainly even though this is more of an experience record than a record that will find you wanting to pick out specific tracks to go back and listen to, highlights like Recover have to be mentioned.  With its dueling acoustic and electric guitars, it’s perfect for a lazy Sunday afternoon, where sleep is certainly out of the question, but a project like (for instance) assembling a cabinet or creating a painting (whether you are an “artist” or not) is perfectly fair game.

For whatever reason that I can’t even begin to explain to you, or myself, Old Hat has the sound to me of falling and love.  It’s victorious and somewhat subdued at the same time.  It’s the sound of eyes being opened.  It’s beautiful.

Mice Parade have created a record that stretches the definition of what an album can be without threatening to annihilate an audience.  It’s not hard listen to, but it’s sometimes hard to remember specific aspects of each song, simply because they all flow together so simply – but in that same breath – that isn’t to say they all sound the same!  It’s organic without being overly artistic.  It stays melodic and off-the-cuff catchy without attempting any type of play to be a record with singles on the radio.  Short bursts like Even are prime examples of this, with harmonics condensed down into about a minute and a half.  I’ve never been to Tokyo, but the appropriately titled Tokyo Late Night, with its dreamlike short piano runs, seems to be exactly what I would be expecting if I were wandering the streets in a lonely part of town at 1:15 A.M. halfway across the world, searching for someone, something, or possibly…myself.

You certainly should give this one a listen.

If you had to listen to two tracks:  In Between Times /  Tokyo At Night