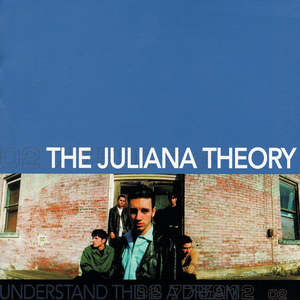 The Juliana Theory – Understand This Is A Dream
Tooth & Nail Records
March 23, 1999

What It Sounds Like:  Sing-along anthems for the pop-punk and emo teens of the late 1990s.

Lead singer Brett Detar was only twenty-one when The Juliana Theory released their debut record, Understand This Is A Dream, in nineteen ninety-nine.  I’m sure he looks back at tracks like Duane Joseph and shakes his head, half nostalgic, half embarrassed at how juvenile the lines are:  Tell your mom you need a day off / So we can play out in the rain / We’ll catch a ride to the mall / Go down to the arcade / Cause that’s where all the cool kids play.  Granted, when you get a record deal and release a record at twenty-one, most of the songs are going to be ones that you wrote at the ripe age of eighteen, so you get a pass for thinking the world may end right on the spot when you have to leave your girl behind as you leave on tour.  Or college.  Or wherever in the world he’s off to in August In Bethany.  But hey, have heart! (Or is it take heart?)  You remember what that was like, right?  I don’t care if you’re eighteen or eighty-one – I don’t think you’re ever too old to want to feel the love pains that make you write teenage lines like I cherish our memories / I wanna kiss your tears away tonight / It’s hard to give up the one you never thought you’d leave / Don’t go / Don’t go / Your eyes see through my soul.  Love is supposed to be fun and and passionate, not dull, boring, and by the numbers.

August In Bethany starts off acoustic, builds in a little power, and by the end, explodes into an emo-pop/rock number that’s enough to make anyone get out their old journal and start scrawling endlessly about the one that got away.  Hey, I like the song – there’s no way around it.

Ultimately, Understand This Is A Dream is a work in progress.  It’s a pretty good attempt for a first record, with average flaws here and there that can be easily forgiven.  A chorus repeated too many times here.  Stretching for a note that there’s no way that you can hit there.  Whining on a little too long when manning up about about whatever you’re dealing with would be sure to serve you better.  But again – you’re eighteen.  You don’t know much better.  Bleeding hearts are fun and full of emotion, but there’s only so far you can go with them until you hit a brick wall, bust your nose and break your glasses and think – “Yeah, it’s time to pick myself up here a little bit.”  Musically, however, the band is certainly exhibiting a sense that the best is yet to come.  There’s nothing here that varies too different from the normal emo-pop-rock flair of the 90s, but it is done well, and when there were an insane number of bands doing this style around this time, The Juliana Theory certainly stuck out as one that showed promise.

For a personal story, I remember seeing Juliana Theory live back around 2005 or so.  Midway through their set, Brett’s microphone stopped working.  A stagehand quickly motioned for him and switched out the mic, but the second one didn’t work either!  After about ten seconds of this complication, Brett decided the best thing for him to do in front of the crowd of three to four hundred was to spike the microphone on the ground like he just scored a touchdown, and storm off the stage throwing a tantrum along the way, like a four year old who’s mommy just told him he couldn’t have that lollipop from the checkout stand.  After a fifteen minute break, while his band mates probably held his hand and coaxed him back out, he addressed the audience, and apologized for how frustrating it is when you play a venue, and the venue isn’t prepared to host a proper band with proper equipment.

I think Brett is, and may very well always be, eighteen years old.  But remember – he’s in a band.  He’s a rockstar.  You better freaking treat him as the royalty that he is, right?

If you had to listen to two tracks:  August In Bethany / The Closest Thing