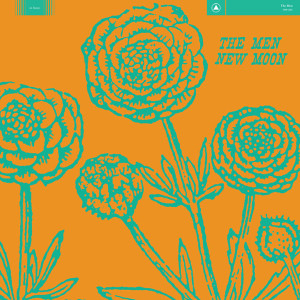 What It Sounds Like:  Much less harsh and abrasive than their previous work, New Moon finds The Men shifting their sights from less noise rock to more classic rock sounds, dabbling in Psychedelia and Americana influences, all the while keeping their punk edge relevant, in an almost surf rock way than a true punk way.  This wouldn’t sound out of place as extremely cutting edge music at the first Woodstock (if the band had gone back in time, of course).

I already pretty much stated this, but when I threw the new record on by The Men, I almost wondered if someone at the record pressing warehouse had used the wrong master and pressed a whole slew of records wrong.  This wasn’t The Men – the distortion and fuzz was there, sure – but it wasn’t overly clashing and speedy at all.  There were vocals on almost all of the tracks, for pete’s sake!  These dudes said Tom Petty was a huge influence on their new record, and with one listen, you completely get the reference.  It’s the perfect mash of classic and Americana styles, up against a gruff punk mentality which they are known for that easily makes for the most accessible records that these guys have released to date.  It’s a huge change in sound, and it couldn’t have served them better.

Half Angel Half Light channels the Americana punk that Tom Petty would probably wholeheartedly enjoy, while Without A Face has a bass riff right out of a black and white film noir, casting shadows and suspicion on every corner of a dimly lit town, while we even find a full-fledged harmonica and rockabilly chorus to keep us company.  The Seeds is an almost alt-country, jammin’ ’round the campfire tune.

The slow burn of I Saw Her Face is just awesome.  The lyrics are pretty all over the place – I’m not going to pretend that I can dissect them and turn them into something that they’re not.  However, the whole point of music being subjective is what makes it magical in the first place.  At the risk of sounding overly mystical, this track hits home on a woman’s unexplainable beauty, but that doesn’t simply mean physical beauty – It’s to look upon her face, but to look beyond her face.  It’s an aura.  It’s an all-encompassing atmosphere that she creates around herself; a Siren in the sense that you can only pray that she has the best intentions.  She might as well stepped right out of a dream, and if some demon from the other side tried to drag her back into the crazy split in space/time that she came from, you’d gladly lay your life down in a second to save her, knowing that it would be completely worth it.

…at least that’s what I take from it anyway.

Would I have come up with that if they wouldn’t have named the track what they did?  Who knows?  But again, that’s why music is all subjective.  Put an idea out there, and let the public run with it.  I did, and I do.

But for all the digging I can do and all the analogies that I can come up with, sometimes the instrumental squealing, shredding, and loose-knit-wildness that makes up the record closer Supermoon is all you need to get by.  It echos their earlier work, and shows us that diversity doesn’t mean abandonment – it means expanding.  The Men have shown us that they know how to do that with superior craftsmanship.

If you had to listen to two tracks:  Without A Face / I Saw Her Face

Quick Update:  This review was written about three weeks ago, but I just saw these guys live for the first time last night (4/30/13).  Wonderful live show, full of passion and aggression – it doesn’t make any sense with how hard and fast they played that they didn’t have to replace their strings after each song.  Live show?  A+