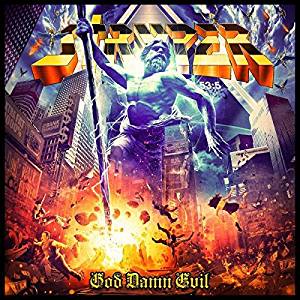 Call its title controversial for the sake of being controversial.  There’s a space between those words, right?  RIGHT?

Did you forget who this band is fronted by?

Say what you will, but Michael Sweet and crew are continuing to rock the hell right out of all of us to the 80s and back. 1986’s To Hell With The Devil was a milestone in Christian Rock – hate that phrase or not, that’s what Stryper is – and they have pressed on while all their peers have fallen away. Not only have they pressed on, but they have improved. Sure, there was the 15 year hiatus from 1990 to 2005, but there have been six records since then, and each only only gets better and better. Who does that? Who makes six records after a 15 year hiatus when your trademark sound has all but expired in current culture? Stryper does that. Take It To The Cross is an insane album opener, and such a Michael Sweet move to stir the pot. What sounds like a heavy, hard-rocking track (Duh. Stryper!) turns into a freaking death-metal / thrash assault with a chorus that you have to hear to believe. “Hear to believe”, you say? Yes, I say. I know that’s a lot to live up to, but I’m telling you, if you know this band, it’s impossible to be disappointed. Sweet growls at the end of this thing. He GROWLS.  Ok, enough with the shock value. Sorry is classic Stryper. You Don’t Even Know Me is straight at the armchair critics. Can’t Live Without Your Love is monster-ballad goodness that could have been taken right off of Soldiers Under Command, which is over 30 years old at this point. The Devil Doesn’t Live Here closes the record that leaves no question unanswered. The Devil doesn’t live here / Only Jesus / Sold out with no fear / Only to Jesus. What more do you want? These guys aren’t experimenting, thank heaven. They know exactly who their audience is, and they know what they do best.  They execute every time, like no one else can.

Also listen to: Take It To The Cross (it’s necessary)