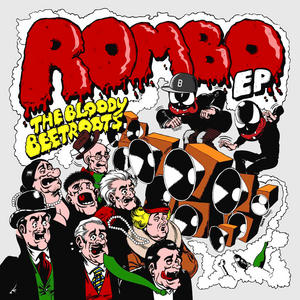 What It Sounds Like:  This is what you’d get if you jumped in a time machine and took the current day offerings of electronica, house, and dance punk and stuffed them into the soundtracks for the sixteen-bit video game era.

What a title for debut EP.

I read about that previous release on a blog somewhere back in college, and to this day, still have never heard it.  But The Rombo EP, their first release on Dim Mak Records; this caught my attention back in two-thousand-eight right off the bat.  You know why?  Look at the cover artwork.  It’s insane!  Bob Cornelius Rifo  alone makes up this…this thing…called The Bloody Beetroots.  He wears a Venom mask on stage with his DJ Tommy Tea, for pete’s sake.  I had to check it out.

I’ll be the first to admit that I’m not up on the electronic/dubstep scene.  There are so many fusion genres that its spawned; I can’t tell you what the differences are between acid or tribal or liquid.  I don’t know anything by Skrillex.  I own one Daft Punk album  – one!  I have one Infected Mushroom record that I’ve enjoyed from time to time, but that’s still not adding much for my credibility.

I must say though – while I don’t feel the overwhelming urge to dive into this genre – I’ve always really enjoyed this EP from The Bloody Beetroots.  Rombo EP is short; just four songs (or five, if you count the extended version of I Love The Bloody Beetroots).  While I don’t have much in the way of other electronica to compare it to, I’ve always felt that this had to have an edge on the other offerings that were out there.

Why?  This is the best explanation that I can give you…

I feel like this is the type of music that would be played on Mortal Kombat or Street Fighter back in the Super Nintendo days, if only those games were created today in two-thousand-fourteen, and not back in nineteen-ninety-two.  Get in your time machine and deliver these tracks to Capcom.  With those anxiety-inducing synth strikes and early 90s techno beats on Butter, I guarantee that if that tune was playing while I was using Sub-Zero to kick your tail in Kahn’s Arena, your death would come even quicker.  Those horrifying piano notes that come in at the two-ten mark would certainly be the perfect lead up to the iconic FINISH HIM! vocal command.

Tell me that when you listen to Yeah Boy with its alien, aquatic beep and boop sound effect elements, that you can’t see yourself commanding the Vic Viper Starfighter through the worlds of Gradius III and picking up those red power-ups.  Gimme some missiles and lasers, stat!  UP / UP/ DOWN / DOWN / LEFT / RIGHT / LEFT / RIGHT / B / A / START /  SUCKAAAAAA!

The title track, Rombo, is rave music full of abandoned warehouses and glowsticks and tabs of unnamed substances that you should not be putting on your tongue if you know what’s good for you.   If you do put that mess on your tongue, you’d probably get something close to I Love The Bloody Beatroots.  Its winter-y, music box chimes at the end are enough to do the trick to either A) make you chill out and stare off into space or B) go streaking across the parking lot.

Let it be known:  I don’t believe you should use drugs.  They’ll kill you.  Use The Rombo EP instead, because this music is enough of a drug in and of itself.

If you had to listen to two tracks:  Butter / Yeah Boy