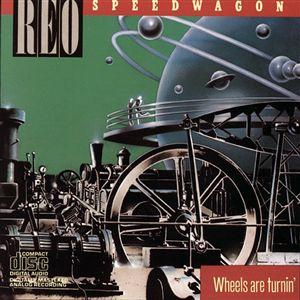 My father, the famous Rock ‘n’ Roll Ron, is responsible for shaping so much of my musical taste from such an early age by introducing me to music from the 70s and 80s when I was growing up.  He had a wooden cassette tape holder that had six drawers, each holding about 10 tapes that, to me, was probably the most valuable thing in the whole house.  Whenever we were going to be out of the house and in the truck for an hour or two, he also had a gray zippered “to go”  tape holder that held about 15 tapes that he always let me fill up for the ride.  Talk about the excitement!  Only 15 tapes – how in the world am I gonna narrow down the selection!?

I can assure you that an REO Speedwagon tape always made its way into that gray case.  They are the first band that I remember ever hearing a guitar solo from, and I’m telling you, a good guitar solo can save your life.  An aficionado of the classics would probably crucify me for saying this, but when I think of awesome pop-rock guitar solos, I think of REO Speedwagon.

Overall, this isn’t my favorite album of theirs; many of the tracks are catchy (it’s 70s/80s pop for crying out loud!), but lack the gusto found on the standouts of the slightly more complex Hi Infidelity or, dare I say, even their 2007 comeback record, Find Your Own Way Home.  I’m also not afraid to admit that while I like music from this era, I’m not near as cultured in it as I would like to be, which makes any sort of in-depth review harder to write.  When I go to the record store, I’m looking for a new 2013 release, and not usually digging to find an obscure 1982 record.  For what I know, Wheels Are Turnin’ has a style that is exactly what a late 70s / early 80s pop-rock record attempts to deliver – it just falls right in the middle as far as quality of the tracks is concerned.  I don’t need to dive into numerous specific songs (save for one) – you know what you’re getting here.

The primary reason for this writing is track six:  Can’t Fight This Feeling.  As I said in the beginning, I’m a sucker for a love song.  I love Sheriff’s When I’m With You.  Chicago’s You’re The Inspiration is undeniable.  But this song – I just know that it edges out the rest.  It’s about as sincere as you can get.  A man is falling in love with a woman, but he hasn’t confessed it to her yet, even though he knows she feels the same way.  When Kevin Cronin has his vocals layered over top of one another in the pre-chorus while debating on confessing his love, he proclaims with a passion in his voice, “I’m getting closer than I ever thought I might!”.  It sends chills down my spine.  I wanna raise my fist and charge down the mountainside with Gandalf into Helms Deep!  Exaggeration?  Not one freaking bit!  Give me a sword, and I’m gonna die in battle slicing up some Orc heads for my love!  Ok ok, a little excessive that time?  NO!

You’re single.  You’ve got that coworker that you’ve been freaking nutty about for the past year (or, ya know, FIVE – whatever).  Think they may feel the same?  Screw the implications!  Today’s the day!

“It’s time to bring this ship into the shore, and throw away the oars, forever”.

If you had to listen to two tracks:  Can’t Fight This Feeling / I Do Wanna Know