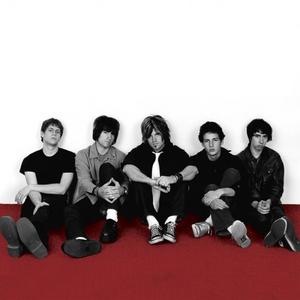 What It Sounds Like:  Smash up some 70s/80s glam and 90s punk rock, muddle up some pop hooks and shake that thing to death.  You’ll have this undeniable two-thousand-two release from Savannah’s finest.

A milestone for my sixteen-year-old self when it was released, Squad Five-O’s self titled record (even though it was number four out of five for them) still rings true to my ears today.  It’s completely accessible.  Big hooks and sing alongs with a bit of punk grit that make these guys the complete opposite of say, The Click Five or something big and poppy like that, while still producing songs that will instantly get stuck in your head.

Baby come back
Come back to me
I think I’m going crazy
Baby can’t you see that I love you….?

If you’ve read any of my reviews, you’ll see my often complaints about filler.  Filler filler filler.  Those couple freaking songs right around the middle that would have served the band better if they would have just left ’em off and released an extended play instead.  But who in the world actually has the restraint to do that?  Few do.

Squad Five-O didn’t have that problem this time around, because this thing really flows like a greatest hits record.  There’s not a bad one in the bunch, and what’s amazing about that accomplishment here is that so many of the songs stay true to the same type of musical form!  Throwback vintage guitar riffs, steady drumbeats, a little speed here and there – but nice, tight, and compact, while Jeff Fortson howls over his band mates with lessons learned of love and loss.  Don’t let that depress you in the slightest – this is an upbeat record!  If you’re feeling down and need a pick me up, throw this one on!

How you gonna feel down when Wasted (With You) comes in with its Mick Jagger-strut?  You’re gonna feel like a million bucks!  Hi-five your bros.  Kiss your gal!  These are the good times indeed!

Too many highlights to even try to mention.  We get the tales of displaced youth with drugs and sex on one side of the coin in Screaming With The Sirens, and then the tale of young love and promises to never leave each other in The Adolescent Night.  But hey, Jeff knows – these are teenagers we’re talking about.  You think this is really gonna last?  Too many dudes, too much money, too many choices – she’s not sticking around for you, small town kid.  It’s on to bigger and better things in the bright lights of the city.  Check out the steady-rocking Don’t Come Runnin’ to let her know – you’re not gonna play second fiddle to nobody.  If you want to chase that ghost / Baby that’s alright by me / You sold your soul / Girl I told you so / Just don’t come running to me.  Your chance is over girl!  Rip into that solo three-quarters of the way through and show her how we play this game.  Geez, it sounds like it would even make Pete Townshend proud – no joke!

Not everyone would give this record a nine out of ten; I understand that.

(the one point dock is for the final track Get Away, and the out-of-place Crystal Coastline – neither bad tracks, but just misplaced)

Like I said in the beginning of this writing…this came out when I was sixteen.  It was prime time for some good ol’ rock and roll, and at twenty seven, it still sounds just as good.