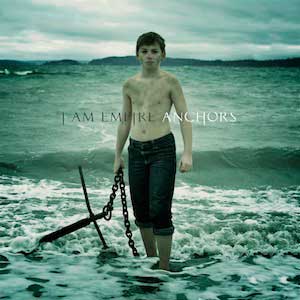 What It Sounds Like:  If you’re familiar with Tooth And Nail records at all, you know exactly the style that you’ll be getting from I Am Empire.  It’s that energetic mix of post/melodic-hardcore and pop punk, with undeniable emo characteristics.

I’m a huge fan of both.  If the label puts something out, I’m gonna try to pick it up.  As such, I bought I Am Empire’s debut record, Kings, back in 2011.  It wasn’t groundbreaking by any stretch of the imagination, and I know that my eighteen year old mind would have enjoyed it more than my (at the time) twenty-five year old mind.  However, it had some solid tracks – it was fun – it was what it was.  It was worth adding to the collection.

This year’s Anchors follows much of the same formula, except on a much larger level, feels uninspired, like a band who’s recording a final record to fulfill their record contract (they aren’t doing this as far as I know).  It’s missing its heart.  It feels safe.  It feels…

Pop Punk and Melodic Hardcore arn’t at the height of their popularity like they used to be.  The likes of My Chemical Romance, The Used, Lostprophets – the relevancy of these bands has faded into the past, though being a nostalgia lover like I am, I can still listen to In Love And Death and rock out.

But I Am Empire are stuck in a rut.  Stuck in the days where you could still sing lines like You are / a beautiful disaster / running so much faster / like water through my veins, and still attempt to sound halfway serious, over a phoned-in barrage of power-chords and back-up trio of vocals to sing the “whoa-ohs” – as they do in the second single – simply titled – Sing.

Seasons of the year, such as winter,  should no longer “wear you down” or make you “fall to the ground”.

I understand appealing to a niche market, but I really don’t think that eighteen year olds in 2013 are as interested in this type of music (or even buying a whole record, for that matter) as I was at that age.  I’ve only mentioned one song off this record so far in this write-up, but I feel that really, that’s all that is necessary.  So many of these songs blend together, and nothing really separates  them.  Are they kind of catchy?  Of course!  If you grew up with this type of music, you can appreciate big choruses, a solo here and there, and the vocals of a frontman lassoing the crowd together in order to unite them to defeat the enemy.  But it runs together.  It sounds the same.  Of course some songs edge out the others, but overall….

Unless Brandon Ebel and the minds at Tooth & Nail have a masterplan that they are ready to execute with I Am Empire, I think this will be the last we hear from these guys.  I guess it’s kind of sad, but it’s survival of the fittest, and there are better bands out there.

If you had to listen to two tracks:  Gravity Bomb / Gasoline