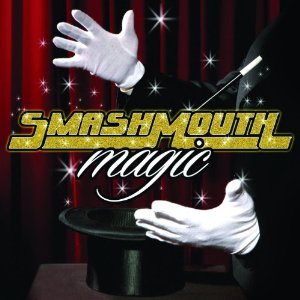 What It Sounds Like:  A pop/rock band trying to recapture its former radio glory without its primary songwriter.

Here we were in 2012 seeing Steve Harwell and his gang release Magic.  I was excited when I heard they were recording.  2006’s indie-and-overlooked release Summer Girl is my second-favorite record of theirs.  What could they have up their sleeve?

This wasn’t without worry, however.  Primary songwriter/guitarist Greg Camp, who had written essentially every Smash Mouth song (especially every hit), left the band in 2008.  What’s a band to do without the guy who wrote their songs?  I was hoping for a bold new direction.  I was hoping maybe for a recapturing of their debut; something in the vein of old-school ska rockers like Flo or Let’s Rock.

I saw that cover artwork.

Whoever came up with that idea, and whoever approved it, needs some serious…something.  I don’t even know what.  Something to get them back in touch with reality.  That freaking thing looks like it was created on an old Dell Computer circa 1993.  What’s with that  red curtain?  It looks like something I could have made in Mario Paint.  A bland black top hat?  White gloves?  The band’s name across the front in gold-glitter?  I mean, this thing is a middle school graphic design nightmare that got that popular girl who wanted to try to be “arty” a C+ on her final project.  “Ohhh, a magician, and he’s making a name appear out of hat!  With glitter!”

Are you annoyed that I’m still going on about this freaking artwork?  I’m annoyed that I have to look at it in the first place!  Geez, it’s a train wreck.

Let’s move to the music:

What can I say?  Smash Mouth is trying to recapture the good old days, but it’s just not happening.  I really wish they could have, but they played it so safe, and what came out of it was a record full of b-side sounding tracks played by a Smash Mouth cover band.  I’ve read interviews with Steve Harwell – he seems like a super nice guy.  But it’s undeniable that Greg Camp was the heart of this band’s music, and without him, the magic is just gone.

Oh, it’s catchy in some ways.  Perfect Planet pops along in an agreeable way.  Live To Love Another Day is a blatant attempt at sounding exactly like the Astro Lounge era singles, complete with keyboards and all.  Lead single Magic sounds like it should have been recorded by Avril Lavigne back in 2002.

Justin Bieber is a stale attempt to capitalize on a superstar’s name, recollecting the good old days, and where they’ve all gone.  Steve knows that he’s not a superstar anymore.  Justin Bieber is at his peak, but is he going to be able to sustain it?  Is anybody going to remember him in ten years?  Is anybody going to remember Smash Mouth, now that they’re back after all this time?

Oh oh, where did everybody go?
In another ten years or so
When it’s after the show
Would you buy another ticket
Or just let me go

I really wanted to; I really really did, but the soul just isn’t there.  You can hear it.  Do these guys really believe in the tracks that they’re playing on this record? Again, yes, it’s catchy (kind of), but catchy isn’t a replacement for a band’s soul.  The energy is just gone.  Future Ex Wife sounds like decent pop, but the lyrics are just flat-out stupid.  Steve, I love your tunes, but I can’t believe that after all these years in a band, this is the best that you can write.  To close the record, in typical Smash Mouth fashion, we get a cover, this time in the form of Don’t You Forget About Me.  I’m sure that you know that song already, so you’ll be able to sing along to Smash Mouth’s simple and plain recording of it.  It would be hard song to butcher, since it’s not overly complicated, but they take zero artistic liberty with it.  It’s a cover, plain and simple.  They play it.  Sunrise.  Sunset.

This record is a letdown.  What can I say?  These things happen.  I don’t think the record sold well, so hopefully these guys see their mistakes, write something inspiring and energetic, and release a new record this year or next by themselves.  Don’t go out on this note guys – you’re a better band than that.

If you had to listen to two tracks:  Live To Love Another Day / Justin Bieber

One response to “Smash Mouth – Magic”