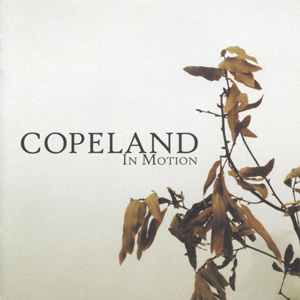 What It Sounds Like:  Piano-fueled indie rock that knows when to serenade us in the quiet moments when we’re introspective, and when to lay us flat-out with emotional powerhouse rock ‘n’ roll numbers.

When I was a freshman in college, a friend and I interned at a management company called Alabaster Arts, who worked with The O.C. Supertones, Jon Davis, and Relient K, among a few other bands/artists.  One of the gentleman who worked there was Milam Byers, who was the lead guitarist for an essential rock band of my youth – the one and only – Bleach.  I was eighteen, coming from a small town in Pennsylvania, only to now find myself in Nashville, making backstage passes for tours while artists came in and out of the office, and having one of the members of one of my favorite bands working at the next desk.

One day, Milam asked my friend and I if we were excited for the new Copeland record.  As I kicked myself in the shins for not knowing this “up and coming” band that he was talking about, I admitted to him that I had not heard of them before.  “Really?!”, he said.  “You really need to check out their new record that’s about to come out next month.  You guys seem like Copeland kids.”

Needless to say, I bought In Motion the day it was released on March 22, 2005.  What a wonderful day it was.

As a quick side note, it’s worth mentioning that Anberlin had just released their sophomore effort, Never Take Friendship Personal on February 1st, and Mae was only a week away from releasing their second, and ultimately mind blowing record, The Everglow, the following Tuesday on March 29th.  Man, in that two month span, three different records were released that were all extremely influential on my taste in music.  I’m sure being a freshman in college didn’t hurt the chances of those records being influential either.

In Motion really is a tour de force, kicking off with the indie-alternative, fuzzed-out rock of No One Really Wins, only to change gears and switch into a beautiful, mid-tempo piano-inspired number, Choose The One Who Loves You More.  Even though that’s only the first two tracks, you can’t deny the superior songwriting, coupled with Aaron Marsh’s distinctive warm vocal tones.  They resonate throughout the record; sometimes louder, sometimes softer, but always powerful in a subdued way.

Let’s address Love Is A Fast Song before someone faints, as it’s a huge fan favorite on the record, nestled in around track seven or eight.  I saw Copeland live a number of times back in the day (they are now disbanded), and I don’t think I’ve ever heard people sing louder than how they do when the chorus of this kicks in.  I also don’t know the proper way to type a huge crowd singing back a three-tired, down-the-ladder Whoa (step down) Oh (step down) Oh, but we do our best…

I mean, come on now.  If love is in motion, and a heart is in motion – there’s some energy resounding in the room.

Your love is a slow song / it’s resounding through my world again.

Such simple thought-out lines, but when you really let it resonate with you on what they could actually mean, and the emotion that could be behind them…You’re dancing because you’re loved again?  That’s gotta be the best freaking dance anyone could ever hope for.  I want to get myself to that party asap.

Aaron’s lyrics just shine through and through – it can’t be overstated.  Not everything is cut and dry, but everything is heartfelt.  He and his bandmates can build fantastic melodies around the most simple, but most sincere lines.  I close this review with an example of this, which of course also serves as the record’s closer, in the form of the gentle Hold Nothing Back.  He cuts no corners.  He makes no excuses.  He gives himself no option for resignation.

Those are simply the most truthful lines that you could ever hope to hear over such a perfect melody.

If you had to listen to two tracks:  Sleep / Love Is A Fast Song

you have my attention.

One response to “Copeland – In Motion”