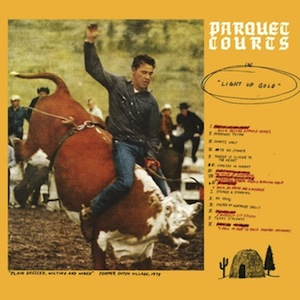 What It Sounds Like:  Indie Rock & Post Punk combine to give us a record full of  stoner melodies, half spoken and half sung vocals, and a slacker mentality unlike anything you have ever heard before.

Andrew Savage and crew have to be stoners.  They simply have to be.  The first official full-length from Parquet Courts is as burned-out as they come, without blatantly shoving drug lyrics down our throats.  Imagine R.E.M. getting blitzed and turning into a indie punk band – you’d essentially have a good idea of what you’re about to experience here.

Though as much as you may want to lump this into a joke category – stripping it from all artistic merits and hitting the plunger – dig a little deeper.  The melodies, as lazy and jagged as they are, are actually quite catchy.  The guitars are bright and quick, while the bass is low and steady.  The drumming is certainly live, but it is incredibly precise.  “Driving” is the wrong word – let’s go with “on-point and steady.”  For exhibit one, take Yonder Is Closer To The Heart, one of the longer songs we find here (3 minutes).

We couldn’t discuss this any further without mentioning Andrew’s vocals.

He knows it.  Don’t worry – you’re not offending him.  That’s why he’ll try to sing some lines, halfway through realize he simply isn’t a singer, and start to half-talk his way through the rest of it.  It’s laughable, but never annoying.  He stumbles his way through this land of uncertainty, singing about half-explored regions of America and his everyman experiences.  Maybe it’s some thoughts on war in Careers In Combat, a depressing landscape of “train death paintings, anti-meth murals, and cigarette advertisements” in N Dakota, or simply wasting the day away on Borrowed Time.

His overall persona is probably explained best in five-minute whopper Stoned And Starving.  The track is indie rock awesomeness, complete with a low-toned riff, as Andrew walks around stating various facts about his current state of mind, only to come back to the fact that he is exactly what the title suggests.  It’s a wonder that all these tracks don’t sound exactly the same considering the state of mind that they were probably written in, but they’re surprisingly unique most of the way through.  The chilled-out verses and stop-and-go post punk of No Idea contrasts sharply with the almost Thriller-sounding intro of No Donuts.  I was half expecting MJ himself to appear in an unlicensed cameo, because…why not?

It’s not music to energize you, nor is it music to put you to sleep, nor should it simply be background music either.

It’s music for the mundane.  It’s for completing tasks and stumbling your way through it.  The first time I decided to listen to this record, I was fixing my bike.  I’ve always had trouble getting the back brakes adjusted.  I’m not a professional, and I am a work in progress with learning the ins and outs of a bicycle, so I was loosening, tightening, adjusting, and doing it all over again.  Black hands.  Grease.  It was a messy process, but fun and enjoyable at the same time.

Just as Parquet Courts are.

If you had to listen to two tracks:  Master Of My Craft / Borrowed Time