What It Sounds Like:  1990s indie-alternative low production gold.  It’s not polished, it sounds like it was recorded on a multitrack, and it’s beyond catchy.

No doubt, I’ve struggled to write this review.

It’s the first time (oh so far, I’m sure there are more of these times to come) that on numerous occasions, I’ve sat down to do a write up on Turning On, and I’ve simply not been able to do it.  I can’t find any words.  Writers block for the reviewer.  I’ve simply moved on to something else where the words flowed out more freely.

I’m not even feeling that much better about writing it today, but at some point, you just need to try your best and go for it.  It’s been sitting around too long.  As much as I love listening to this record, I need to write this so I can get past it.  Today, while writing this, I currently have on red skinny jeans, a black v-neck, and Converse All-Stars.  I’m pushing this stereotype in serious fashion, and it wasn’t even planned – it’s just what happened.  I’ll take that as a sign that this needs to be written.

If you’re one of those cool indie scene kid types, you probably like Cloud Nothings.  It’s production is kind of muddy, lead sing Dylan Baldi’s vocals are drenched in reverb, and they seem to really not give a flying toss about anything.  I’m sure their equipment is beat to death because they don’t take care of it.  They have empty beer cans sitting around their apartment, and the laundry has been piling up for so long, it’s almost not even worth looking at it anymore.  Just grab something and put it on – screw it.  The melodies on Turning On are just like their lifestyle – not well thought out or constructed with anything that seems like it should actually hold.  There are no nails here – just gluesticks.  Nanchalant strumming, drumming, and vocalizing that somehow have morphed into catchy choruses for the generation of losers that don’t want to think past the next hour on the clock.  Now realize, when I say catchy, I don’t mean that this is stuff you should expect to hear topping the charts.  Maybe instead if catchy, we should use the term “instantly recognizable” in a positive sense.  As soon as lead off Can’t Stay Awake kicks in with the chorus, you don’t need any help remembering it from the last time you heard it.  Call call call a-call me over / ‘Cause I I can’t stay awake / Call call call a-call me over / ‘Cause I I can’t stay awake.  If you’ve heard it, it’s catchy right?  But, why?  I like to dissect things, but I feel as if I’ve hit a brick wall here.  How about the lost-in-the-shuffle gem Real Thing?  I assure you, I’m not trying to make a cool indie reference here, but you know how sometimes songs just put you a certain scenario?  You hear them, and you can just see the perfect setting for them and when they should be played?

Alright, does anyone remember that old Nintendo game (not the Super Nintendo, but the original one) called The Mafat Conspiracy? 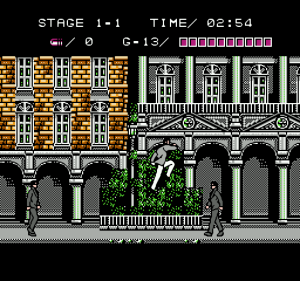 I hear Real Thing come on, and all I can think of is this game!  The chorus kicks in, and I’m transported right into the middle of the action, ducking behind bushes and shooting at the unnamed men in black suits that are after me.  The verse comes in, and I’m black on the move…

Personal relation, that’s all it is.  Why do we dream what we dream?  Why do we make these random connections that we make?  Your guess is as good as mine, but the truth is the truth.

Cloud Nothings certainly like to mix their clean guitars with their distorted ones.  I see they like the wall-of-sound appeal – they could probably be a great shoegaze band, but I’m thankful that with Turning On that they’ve stuck to writing, um…catchy indie rock/pop songs with the bass turned up way too loud (but I love it!) that were recorded in a small room on old equipment?  This writing is all over the place.  Maybe that’s good – maybe that’s bad – but I’m not going back to rewrite any of this.  It’s gonna be a take it or leave it write up for sure.

Just as this record is unexplainable and unexpected, so will be the ending of this review.

If you had to listen to two tracks:  Hey Cool Kid / Can’t Stay Awake