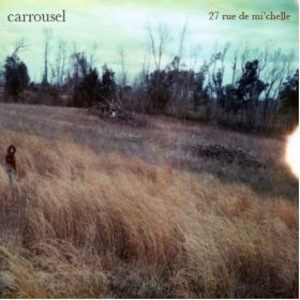 What It Sounds Like:  Bits of chamber and dream pop blended together into an orchestral backdrop that would serve as a perfect chill companion to a night in a late fall / early winter cabin with a glass of wine.  That is, if you’re into that sort of thing.

French culture and the written word have an undeniable romanticism to them, even if that emotion in itself is the extent of your knowledge about the subject (that’s me).  27 rue de mi’chelle is a perfect example of a record that I am very glad to own, even though I know it’s not something that i’ll listen to all that often, simply because the timing for my personal appeal to this type of record doesn’t come as naturally as I would hope.  The way it sways and swoons through the overarching theme of the love and loss of Michelle is anything but uncanny; it flows over you and surrounds you like the light fog on a cool Paris morning.  Joel Piedt is the brainchild behind this Tallahassee collective (Tallahassee?!), and his ghostly vocals pair so effortlessly with his musical arrangements, it’s almost difficult to distinguish between them.  This is a well oiled machine.

Listen to the instrumental In Her Tomb By The Surrounding Sea.  Truth be told, I like my music louder and energetic more times than not, but regardless of personal taste, you can’t deny the beauty behind the simple structures that Carrousel give us here.   The lyrics are like those out of a dream, full of half-thoughts and open ended narratives, that give the listener a depiction of nothing more or less than a simple sense longing; a longing to hold and breathe in this Michelle – or at least the sense of her – one last time.  Lost love.  Who can’t relate to it?  Who wouldn’t want to relate to it?

Whether he finds her or not – we don’t know for sure.  I have my doubts that he does though.  Searches through empty fields and moonlit parks rarely give us any further guidance.  Sometimes things that are lost are simply…lost.

If you had to listen to two tracks:  You Only Love Yourself / Moonlight