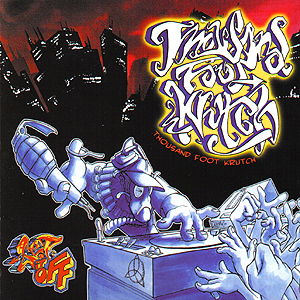 The words “nu-metal” or “rap metal” are enough to send tons people running for the club doors in this day and age.  We think of  Kid Rock (pre-country), Limp Bizkit, Korn, and the turn of the century Family Values Tour.  Static-X?  Dudes, spike your hair up high and let your jeans sag low – we’re in for a no-holds-barred verbal slamdown.  Before we all stated to hate Nickelback, we hated the rap rockers.  It was 2001, and TFK stormed the scene with their debut – the “Christian” alternative to Fred Durst and his gang of sinners.

I say this in the most lighthearted way possible.  I listen to everyone across the board, regardless of race, sex, religion, lifestyle choices, etc.  I own all the Limp Bizkit records, and Significant Other is a milestone that shaped my musical taste.  It was heavy, fun, irreverent, and ridiculous.  It’s a review that I look forward to writing.  What I love about Thousand Foot Krutch is that they came on the scene when rap/rock was at the height of it’s popularity, but had their debut release DJD recordings.  Never heard of it?  No wories – I had never heard of that label in 2001, and I still have never heard anything about that label in 2013.  That is, apart from this release.

DJD probably released this record because, from an industry standpoint, I understand why some A&R dude wouldn’t want to touch this.  No well known labels were gonna touch this!  It’s rap/rock, sure, but its got countless styles all over the place.  When In Doubt is pop-punk, while Come Along is straight pop-rock!  Rhyme Animal is funk-metal, while Puppet and Supafly bring rap to the forefront, but have choruses that are straight heavy rock.  Small Town is a seven-minute slow-burner of a power ballad where lead singer Trevor McNevin stretches his vocals to places that it probably shouldn’t go, but you can’t fault him for it – he’s singing from his heart!  This record is a lesson in diversity, and while some may complain, I for one, cannot.

The lyrics are all over the place, from the corny to the sincere.  Album closer Lift It is a modern take on praise and worship music which may come across as incredibly lame to anyone who grew up in any type of youth group setting and had to sing In The Secret one too many times.  But it’s truthful, and it’s heartfelt.  At the end of the day, can you really argue with that?  I can’t.

But sometimes – you just need Supafly.  How much fun is this?  Trevor is giving is straight up to that girl who needs to check herself into reality.  Trevor – let’s go:

And in the corner / I can see ya standin’ there
Black jacket ‘n’ long hair / We’ve been exchanging stares
And I know ya / And what’cha thinkin’  / yeah right
Wearin’ ya clothes air-tight at the club every night ‘n’
Don’t cha know that brothers don’t like the girls
That be into the guys that be tellin them lies and
Listen here hun,
Life’s more than this,
Ya tryin to tell me that cha never get bored of this?

The truth is wonderful, isn’t it?

If you can bring yourself down from your high horse and be able to have some fun with some rock ‘n’ roll, with some rappin’, with some punk – you’ll find some gold right here.

If you had to listen to two tracks:  Supafly / Puppet