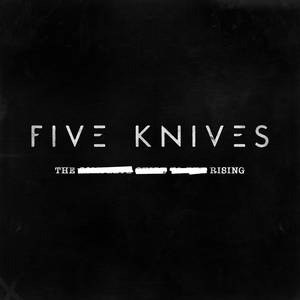 If you know me at all, you know I’m going to have to really attempt to separate myself from one of the band members in Five Knives to give this is a truthful, unbiased review.

There is a certain band that I was introduced to in high school, and I really dug this band’s first record.  After coming to their hometown of Nashville in 2004 for college, a core group of us saw them countless times over the years.  So many memories are intertwined with their music; it’s hard to say “college” without thinking of…this band.  It didn’t stop there – even after college, we saw them anytime they would play a local show.  We grew up to this band.  We loved and lost to this band.  They just played their final show in December of 2012, and it was a bittersweet moment to bid them farewell.

This band was Luna Halo, and their lead vocalist (and dare I say, next to Kevin Max, certainly my favorite vocalist of all time) was Nathan Barlowe.

Nathan is the keyboardist and backup vocalist for Five Knives.

The bar was sat at an unreachable level.  How to come at this with a clear head?

First off, Fives Knives is nothing like LH.  Nathan isn’t the frontman, and they’re not a rock band…per say.  It’s primarily electronica with rock elements.  With an “honest-with-myself” mindset, I set out to listen to these songs as if they were chart topping, number one songs on Billboard, right up with the Biebs and Nicki Minaj.  What would I really think of this stuff if I had no idea who was performing it?

I’m glad to say, that after thorough introspection, I can give this five-song EP my endorsement, with no shame that my thoughts have been tainted by any “outside the band” influence.  Let’s get real about All Fall Down; this is a rock song all the way.  Lead singer Anna Worstell is the definition of fierce – she’s here to tear your speakers to shreds.  She seems sweet enough through her vocal tone, but it’s a complete 180 to hear these words come out of her mouth:

Do you really want to be on the receiving end of that one?  Once she gives you her blood curling “ALL FALL DOWN!” – you’ll have your answer, and you won’t ask her any questions ever again.

Vive Le Roi and Messin’ With My Mind follow with a more electronica feel than their predecessor, but nevertheless bring the energy. Vive Le Roi is rave music personified – glowsticks, lasers, and all.  I don’t know a ton of trace, but I do know Children by Robert Miles.  Call it shooting for the stars, but they compliment each other.  Messin’ With My Mind  needed a few listens, but that chorus quickly grew on me.  I have a feeling that this actually may be the best one out of the mix that works live.

I’ll leave The Future and The Rising up to you, but suffice it to say, I’m glad that these tracks don’t all blend together.  They sound unique.  They don’t sound like a five-song megamix, which is my major problem with most electronica.

I’m quite confident that they would be like an unleashed dog up on stage.

If you had to listen to two songs:  All Fall Down / Vive Le Roi

One response to “Five Knives – The Rising EP”