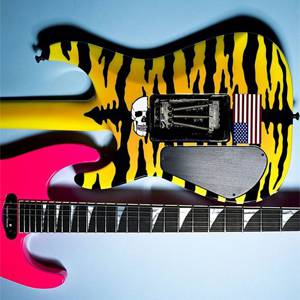 What It Sounds Like:  Alexis Krauss and Derek Miller polish up their noise pop shreddings, bringing us a record that isn’t as chaotic and intense as Treats, nor as grand reaching as Reign Of Terror.  Instead, they take a step back and make a slight wrong turn, bringing us Bitter Rivals, which is a record that sounds almost too cute at times.

If you’re familiar with Sleigh Bells, you’re know their shtick:  absolute pop music at its core, but with huge guitar noise and bounding electronic elements, all backed up with distortion galore.  On Bitter Rivals, they sound like a band that is just that:  rivals with themselves.  Pop music is here in abundance, and it’s almost too safe.  It was the best of times / It was the worst of times, Alexis charges out of the gate as the record kicks off, and it’s never been more apparent.  She makes this claim in the lead-off title track, which gives us pummeling verses up against a minimal sweet-as-sugar chorus – exactly what Sleigh Bells fans are looking for.  However, we see the momentum start to die a little bit as we enter the likes of Sugarcane, and by the time we’re at something like Young Legends, you may be asking yourself if you’re listening to the new Sleigh Bells record, or if somehow a makeshift Miley/Lady GaGa/Santigold hybrid record has made its way into your player.

No disrespect to Santigold.  I like her.  She’s just not Sleigh Bells.  As far as the other two…I shouldn’t even have to explain any further.

Don’t get me wrong – Sleigh Bells haven’t completely lost their edge – not by a long shot.  The guitars may not be turned up as loud as they were on Reign Of Terror, and the distortion that made Treats one of my favorite records of 2009 may be taking a backseat, but the intensity is still there with the likes of Sing Like A Wire, Tiger Kit, and the minimal, but still powerful You Don’t Get Me Twice.

But even with all that being said, there’s too many mid-range level songs here that outweigh the true standouts.  The production is slicker than we’re used to, and the sweet moments certainly outnumber the powerful ones.  It’s all well and good for the sound, but it’s too much of a hard-left from the expectations that they’ve set.  Is it a bad record?  Far from it.  Is it coming in third place behind their first two outings?  Certainly.

If you had to listen to two tracks:  Bitter Rivals / You Don’t Get Me Twice