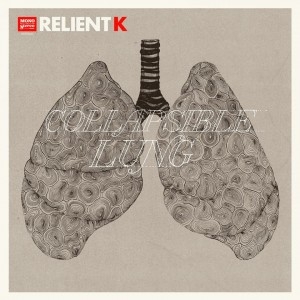 What It Sounds Like:  If you thought Relient K was too poppy before, wait until you hear this thing.  Gone are almost all of the pop-punk influences, while the differentiation between pop and rock clocks in with a very heavy 80/20 split.

Sometimes it’s better to start at the end and work your way backwards a little bit.

Let’s cut to the chase.  Collapsible Lung is getting a 7/10 (or maybe a little more by the time I’m done writing this!) It’s a fun, enjoyable record that will make you feel good and have you singing along.  It is also insanely different than anything that you have heard from Relient K in the past, because this is a huge pop record, through and through.  Yes yes, they’ve always made pop music.  But – forget any dose of punk.  Forget the little bits of rock we find here and there.  This is Relient K at their extreme mainstream poppiness.

Most Relient K records are written by singer/guitarist Matt Thiessen and lead guitarist Matt Hoopes.  Collapsible Lung features an array of outside sources, from Evan Bogart (Rihanna) to the huge hit-maker Ari Levine (Bruno Mars, Cee Lo Green).  I’m not sure what made the RK boys want to go down this avenue other than saying, Hey, we’re seven official records into our career.  Let’s make the poppiest, catchiest and most diverse thing we can think of!  If that sounds good to you, oh baby – believe me, you’re gonna find a lot to love here.  Not only is Relient K in over-the-top pop mode, but it’s about every type of pop that you can think of, from the quirky indie pop of Disaster, to the new-wave pop of If I Could Take You Home, to the straightforward pop-radio-rock of Boomerang.

You could call it a blessing or a curse, but the outside songwriters “influence” plays a huge dominant role here.  PTL could without a doubt me the next Maroon 5 single, and also without a doubt could climb the Billboard charts (if only Adam Levine was singing it; if this record picks up, I’d love to see Matt up there)!  I frigging hate The Lazy Song by Bruno Mars (side note:  did you know that song gives writing credit to four different songwriters?  FOUR?  How simple is that stupid song to need four writers?), but every time I hear the intro to the reggae-influenced Can’t Complain, all I can think of is Bruno with that smug smile on his face, and I want to hit “next” faster than the time my finger allows itself to get to the button.  But that slide guitar on the chorus?  Catchy, man.  Would it surprise you to learn that steady, driving heavy-pop/light-punk anthem Gloria was co-written by Sugarcult’s Tim Pagnotta?  Yeah, me neither.

Lyrically on the record overall, a good friend of mine stated it like this:

If you dove into that pool, you’d probably break your neck.

I certainly understand that mindset, and agree with it for the most part. The lyrics aren’t necessary bad, but the trademark wit that Relient K is known for is certainly lacking. What was a special part of Relient K shows up on Collapsible Lung as simply commonplace and stereotypical; songs about meeting girls and taking it easy and…whatever Boomerang is about (answer: a girl. a relationship. but nothing really specific). The two best lyrics for me come at the end, as I can get behind Sweeter and Collapsible Lung, the title track.

For those of you that grew up while these guys were making waves in the “Christian” industry, it’s noteworthy to mention that without any prior knowledge, you wouldn’t have any idea of their faith concept.  It’s not that I am asking for, or even expecting anything as in-your-face as For The Moments I Feel Faint.  It’s not required at all.  What I am expecting, however, is some sort of depth beyond relationships and girls.  Sadly, we don’t find it.

But for the shallow pool lyrically that this record may be, it could be a heck of a lot worse too.  If Relient K set out to make a “fun” record and nothing else, they’ve accomplished it.  Tons of this stuff you can sing along too, and tons of it can get stuck in your head.  As previously mentioned, there is also an enormous amount of diversity here for being a simple pop record, with absolutely no two tracks sounding the same.  It’s not redundant, and there is no filler.

This isn’t the Relient K that you grew up loving.

This also isn’t the Relient K that I want to see for the rest of their career.

But what this record shows us is that they wanted to change it up, and try something different.

They succeeded.  I’m a fan.  Because this group has proven themselves again and again, and if this is what they wanted to do this time around, more power to ’em.  I can’t wait to see what else they have in store.

Go try to listen to Lost Boy and stop yourself from whistling along.  And those bass piano notes….

If you had to listen to two tracks:  Don’t Blink / If I Could Take You Home