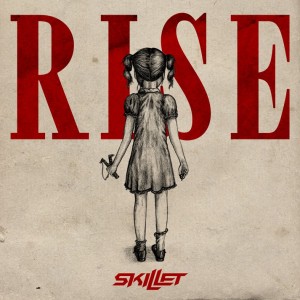 What It Sounds Like:  An evolution of Skillet’s take on hard rock music paired with pop choruses, somewhat dialing back the orchestral accompaniment and certainly dialing up the cheese.

Like a hand grenade / Thrown in a hurricane
Spinning in chaos / Trying to escape the flame
Yesterday is gone / Faster than the blast of a car bomb!

…so delivers John Cooper in his signature clean-but-shredding vocal tone.  This comes in as the lead-off title track of Skillet’s first record since 2009’s straight-up radio single galore effort, Awake.  Along with his wife, Korey, and more newcomer young-ins Jen & Seth, Rise is crafted as a dramatic, fully Christian embrace of Hot Topic and us-against-the-world culture.  They’ve got a song on here called Circus For A Psycho, for goodness sake.  Yes, as you can imagine, some of the cheese is through the roof.  You saw the lyrics I just typed above – Yesterday is gone / Faster than the blast of a car bomb is reaching a little bit too much for my mind.

It’s best explained by saying it this way:  Do I personally connect with Rise as much as I did with previous Skillet records?  I don’t.  I’m sure part of it has to do with being 27, growing up listening to this band, and simply moving away from needing to be told to cut out all the excess feedback to appreciate what is really important in life (American Noise) or songs that talk about the fire that burns inside and then titling them Madness In Me.  There are many more overly dramatic flourishes intermixed in this record, from passionate full-on choir vocal breaks, Korey over-harmonizing and stretching her back up vocals to the max, and spoken-word interludes that include, but are not limited to, things like: 1) a frantic woman screaming “kids, get under the table!” 2) A British news reporter reporting on the worldwide unemployment rates.  3) Police radio chatter.  4) A man yelling things like “You are such a failure; what’s wrong with you; you can’t do anything right; I wish you had never been born!”

Granted, those last four items come as an interlude to the record’s first single Sick Of It (with those items showcasing things that we are sick of).  Either way, the drama is high.  Pick up your pitchforks.  Fight the power.  Stand your ground with your face bloody, broken, and beaten.  RISE.

Don’t think I’m about to tear this record apart or anything just yet.  While I no longer may be exactly the market that Skillet is trying to cater to (they’re part of the upcoming Carnival Of Madness tour with Shinedown and Papa Roach, if that helps you understand any better), there’s no denying that these guys know what they’re trying to do, who their audience is, and how to accomplish the task.  They do it well; they succeed, no question about it.

They succeed because when you cut through the dramatics, you find a record that really is full of great, catchy songs that set themselves apart from one another.  Lead single Sick Of It is a driving hard rock song that actually features a small little breakdown at the end!  To their credit, Skillet have always been skilled in crafting harmonies into their harder edge sound, as they do in Not Gonna Die, and more mid-tempo rockers like Salvation and Fire And Fury.  Again, in typical Skillet fashion, some catchy pop-rockers (Good To Be Alive, which brings a piano in as the secret sauce) and power ballads (Hard To Find, American Noise) are thrown into the mix as well.

For the most part, Rise incorporates a formula that, musically, shouldn’t surprise many Skillet fans.  We have the hard rock.  We have the string sections.  You know what you’re getting.

Not the case on one track however, as the the most shocking and out-of-left-field thing we find here comes near the end, with the throwback swagger, sexy riffage, and B3 organ filled My Religion.  Oh, I can enjoy it, don’t get me wrong – but even as I write this – I’m still trying to just…figure it out!  How can John do the awkward strut across the stage that this song requires while singing likes like…

Your guess is as good as mine how he’s gonna pull it off, but love it or hate it, I’m glad they tried to change some things up and throw something completely different into the mix.

Overall, this is certainly a record that is going to fall on different ears in various ways.  If you’re a fan of radio hard-rock, you’re be into this, no question.  It may be too safe for many, but for me – Skillet is a band I grew up with.  I remember seeing the video for Gasoline at a mere 10 years old on Z-TV, though I didn’t really buy my first record until 2000’s electronic-tinged breakthrough, Invincible.

I’ll stick with these guys through thick and thin.  Is it a great and awesome record that I can’t put down?  No.  Is it a letdown?  Not even close.  It’s enjoyable and right down the (don’t hate me for saying it) predictable alley for Skillet, which I can’t even complain about in the slightest.

If you had to listen to two tracks:  Not Gonna Die / Good To Be Alive