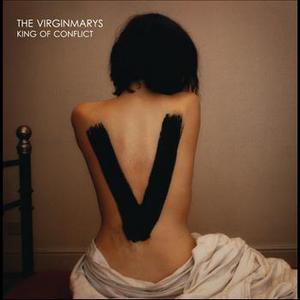 What It Sounds Like:  Powerhouse rock ‘n’ roll with a tight execution from this trio out of Macclesfield, England.  Remember Get Free by The Vines back in 2002?  Take that, multiply its power times five, and throw in some Led Zeppelin riffage.

The best track on The Virginmary’s debut major label release is easily track number two, Picture Of Red.  As a lead in to the chorus, Ally Dickaty wrote a sure fire line to get every rock ‘n’ roll girl in the venue to scream back at him, and I’m sure, if the opportunity arose, he would gladly fulfill their request.

He snarls this while his bandmates, bassist Matt Rose and drummer Danny Dolan, abuse their choice instruments with enough power and aggression that I would half expect the club to turn into the Rock In Rio stage and be swallowed up by that huge demon from Iron Maden’s record cover back in 2001.  Watching my girl taking out her aggression / A pain from her hell, feels like a pain from my heaven / Hands ’round my throat, my baby teaches a lesson / I see all sorts of colors goes the verse.  This is neck-biting, back-clawing sex to the extreme.  They hold nothing back.  Kings Of Leon wish they could set their girl’s sex on fire like this.

The intensity doesn’t let up for the rest of the record.  Not that every track is as flat out in-your-face explosive as some of the others, but we don’t find a single ballad the whole way through.  I, for one, will take that.  Too many bands throw a crappy ballad or two in the mix to try to add some variety, and they usually come out poor.  Not the case here; the closest thing we have comes in the form of the power ballad Dressed To Kill, which holds its own just fine.  We continue to charge into Out Of Mind with some dirty blues that only builds in intensity the further we venture into it.  Running For My Life sports a monster riff that would make Tom Morello take a second look at the stage.  The choice of lead single Just A Ride was a smart one – it’s a straight forward garage rocker with hits of punk that are unrelenting – power from the opening note to the closer.  It’s full of heavy riffs and heavy hearts when our protagonist realizes that to his girl (or former girl, we should say), he was nothing more than “just a ride” – replaced with a new man from one second to the next.

There are countless instrumental solos throughout this work, which is also a more than welcome addition.  These tracks could have been straight hard rock, chugged their way through, and ended.  The musical landscapes that they choose to explore, while all staying in the hard throwback rock vein, are an essential piece of the puzzle to make this record worth listening to.  I can see an alternate universe where this project’s production process went a different way, trying to stay super safe and absolutely failing – thank goodness it didn’t do that.

I have high expectations for this live.  If they hit Nashville, you better believe I’ll be in attendance.

If you had to listen to two tracks:  Portrait Of Red / Running For My Life

One response to “The Virginmarys – King Of Conflict”