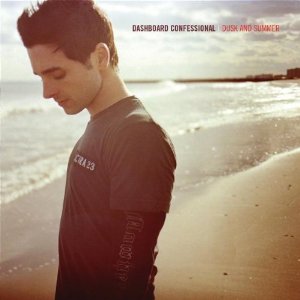 What It Sounds Like:  Singer/songwriter Chris Carrabba attempting to grow out of his emo stages (unsuccessfully) with a full electric backing band (successfully).  Teenage anthems for the beach, the setting sun, broken hearts, and unrealistic expectations.

Most of you know Dashboard Confessional.  Dusk And Summer is a step down from his previous breakthrough, A Mark, A Mission, A Brand, A Scar.    It’s an lesson on why not to try to hard.  It’s a lesson in knowing that when you write so hardcore for one specific market, you tend to even annihilate everyone (even your target), because it’s just overboard.  The dude’s standing on a beach, looking down in deep thought, wearing a short sleeve shirt under a long sleeve shirt.

…..and the title of the record is Dusk And Summer.

You might as well have a Billabong sponsored beach volleyball tournament going on in the background with muscular dudes and tan, bikini-clad girls.

Let me transition and say something positive that probably won’t be met with many arguments:  Stolen is a killer single.

It doesn’t matter your age – you’ll feel 18 again.  This is cloud number nine love.  This is a huge emotional love song, but more than that, it’s a dedication love song.  You have stolen my heart.  It’s gone buddy – it’s hers now to do with as she pleases.  It’s the type of love that too many people tend to lose after a while, simply because we’re human, we’re selfish, and after a while, we have way too many options.  Gentleman, if you’re lucky enough to get up in the morning at the same time as your wife – call me crazy – but set this tune as your alarm.  Look that woman laying your bed, right in the eyes, and tell her that she’s stolen your heart – every day – and actually live it out through your lifestyle.  You”ll be freaking golden.  Ladies, you could do the same thing back!  But not this song.  Maybe something like….I don’t know.  Even if I did, I shouldn’t even put it out there – This is a Dashboard review.  Geez, I can’t give you all the answers here anyway – I’d have to start charging for this…

Now, for the rest of this, it’s another prime example of splitting a record down the middle between the good tracks, and the filler tracks.

One through five?  Good, but not great, tracks.

No reason to even go into six through ten.  They’re mediocre songs, and that’s really the end of the story with them.

As far as the first five go, lead single Don’t Wait doesn’t even come close to his previous single from three years prior, Hands Down.  It’s not a bad song, mind you, but it’s nothing spectacular.  Chris really stretches his voice on his second run of singing Don’t Waiiiiit during the chorus, and it makes me cringe every time.  Too much, too much.

As far as Reason To Believe, The Secret’s In The Telling, and Rooftops and Invitations, they’re certainly the three strongest tracks here behind Stolen, but even then – they’re still just decent songs, and nothing that really blows you away.  Better than the latter half of the record, without a doubt, but nowhere near as good as most of the tracks on his previous record, or even his newest, 2009’s Alter The Ending.

There were three records before this one that Dashboard Confessional released.  The first two didn’t sell too much, but obviously, A Mark A Mission A Brand A Scar was his breakthrough smash, so Dusk And Summer could certainly be labeled as his “major” sophomore effort.  Sadly, it didn’t avoid the dreaded sophomore slump.  Filler tracks, decent tracks, and one bright shining diamond of a single.

Stolen can’t save this record as a whole.  It’s a shame that such a standout is buried in a sea of mediocrity.  If you’re up for it, check out the lesser known radio edit of the song (it’s 3:19, versus the original 3:53).  It’s got more drums, and it’s also a little faster – certainly my favorite mix.

Tell me that line doesn’t invoke a wonderful emotion.

If you really want to set yourself over the edge, watch the music video.  It’s spot on.

If you had to listen to two tracks:  Stolen / Rooftops And Invitations