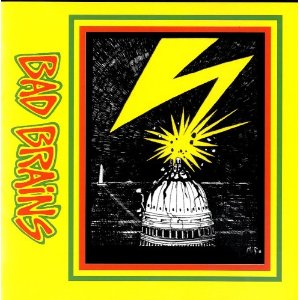 What It Sounds Like:  Early 1980s hardcore punk with stretches of reggae that paved the way for everyone from 311 to Sublime.

Look, I understand how sacrilegious this must be.  I was still four years away from being born in 1982.  I wasn’t even a thought; not a blip on the radar – nothing.  So where to I get to the gull to sandwich an iconic record like the Bad Brains debut between two other completely random reviews?  Doesn’t it deserve a pedestal to sit on?  Where’s the respect, kid?!

The fact of the matter is this:  The true origins of punk were before my time, so there is no other way for me to experience it than to go back before my time to discover it.  I can’t set something apart just because it was groundbreaking in its heyday – because it’s not groundbreaking anymore!  All we can do is look at it for what it is – what else was around during that time – and go from there.  I can’t pretend to be an expert.  I love music, and I always want to be learning.

What I do know, is that there really wasn’t a lot of hardcore punk going on in 1982, especially from (get this) Rastafarians!  You hear some of these lead-offs such as The Regulator or Banned In D.C., and you can immediately sense the urgency and cutting-edge power.  The vocals are desperate, and the production values are low.  It has all the makings of an up-and-coming underground breakthrough.  However, all of the sudden, Jah Calling and Leaving Babylon kick in, reggae vibes and all.  We have to sense this is more than just a pioneering hardcore punk record.  It’s a lesson in diversity and a hodgepodge of styles.  I have to admire the various rhythmic choices made on  the record, such as the attempts to slow down into an almost heavy rock (complete with a solo!) mode on Right Brigade.  Most of this record charges along at a flying pace, but for them to choose to slow it down once in a while, add the reggae, and chill it out – it shows restraint.  It shows respect.

Someone that was fifteen when this record came out would write this review much differently.  They’d write how this shaped the whole musical scene.  They’d write how their views changed after they heard it for the first time.  I, personally (and obviously), can’t do that.  When a record is groundbreaking such as this, how do you give it any less than a glowing review?  What if someone actually said, “You know what?  That Bad Brains record is pretty dull – I’m giving it one star.”  They’d get their head torn off!  But it’s all about personal preference, and it’s all about how record stands up in this day and age.  This isn’t about how this record would be reviewed in the 80s – it’s about how it would be reviewed in the current year of 2013, taking into consideration its history and its merit.

If you had to listen to two tracks:  Banned In D.C. / Jah Calling