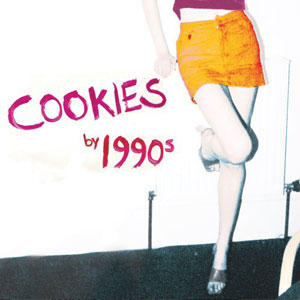 What It Sounds Like:  Peppy, super-simple, super-catchy, indie-rock kids banging out treble-heavy  rock ‘n’ roll that wants to get you on the dance floor.  But keep in mind:  This isn’t dance rock, but it very possibly may make you bust out some geeky dance moves.

I’m pretty confidant that if Napoleon Dynamite had a favorite band, it would easily be Glasgow’s own 1990s.  These dudes are just about as nerdy and big-toothed as they come – skinny, pale little guys who were probably begging for the jocks to beat them up in high school.  I can see them standing up there in front of their school for a battle of the bands playing the newly written Arcade Precinct, and just getting pummeled by the popular kinds with physical and verbal insults.  “Who do you think you are; Franz Ferdinand?! Oan yer bike, ya boggin’ bampots!”

The lyrics are just nutty, so don’t look for much depth.  Take for example, Enjoying Myself:

Ah, the clarity.  This is only one of the many uses of the word “drug” or “drugs” throughout Cookies.  It’s not the type of music you’re expecting to have drug references, but none of it sounds overly sincere.  As I said – these guys are just wacky.  Read those lyrics.  Do they sound like kids who are serious about their drug use?

Even so, I guarantee you that these guys don’t take showers after their shows.

Musically, 1990s excel in the simplicity that other bands try to over-complicate, and it’s incredibly catchy.   I love You’re Supposed To Be My Friend.  It’s straight forward indie pop/rock that sounds like kids playing in their garage after school.  It’s hard to get you on the phone / You’re never home / You’re never at my place neither / Well that makes two of us! lead singer Jackie McKeown lays down on some of the opening lines.  Dude, the guy just want to hang out!  Take some drugs again – ya know – whatever.  However, your immediate first listen should be You Made Me Like It, the lead off track.  Dancing on the ceiling / Dancing on the floor / You made me like it more and more! goes the chorus.  1990s don’t want to take themselves too seriously (if you couldn’t already tell).  It’s just about having a fun, upbeat time.  They do this on most of the record, except when they try their hand at their version of a ballad near the end of the record with Weed (hey, imagine them titling a song that!).  It’s a misstep.  They probably had smoked too much when they throught recording the song was a good idea.

This is an easy record.  You don’t have to try too hard here; it’s certainly one to be taken at face value.

It’s worth noting that I’ve certainly been taught a lesson in how I may like something, while someone else may think the complete opposite, with this record.  I put You Made Me Like It on a mix for a friend one time, thinking that he was just the type of dude that would be able to appreciate this geeky type of rock.  He called me a couple days later.  “Dude, you made me a great mix, but what’s up with that song from the 1990s or whatever?  I freaking hated it – so annoying”.

You’ll love it or you’ll hate it; simple as that.  Probably not much middle ground, because for such a simple style, I don’t see any other bands around that really sound quite like this.   I understand the tendency for the vocals to be pitchy and annoying – but for me – that simplicity and imperfection only adds to the appeal.

If you had to listen to two tracks:  You Made Me Like It / You’re Supposed To Be My Friend