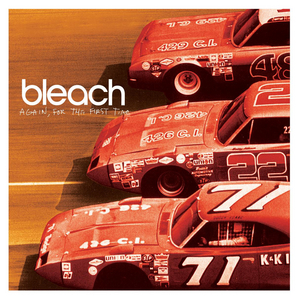 I love things that you just can’t put your finger on.

Bleach is a perfect example.  What is it about these guys that sets them apart?  I mean, it’s certainly not experimental.  It’s fairly straight forward rock ‘n’ roll.  Good catchy choruses with the slightest touch of grunge.  Maybe it’s the heavy lean on the bass?  Maybe it’s Davy Baysinger’s reluctance to ever seem like he’s trying to put too powerful a vocal out there?  Is it his slacker mentality?  How horrible to say – he’s anything but a slacker.  But look at this dude.  Glasses.  Messy hair.  His vocals certainly arn’t anything that sound too polished.  You’d think he’d be in the back room writing computer code than awesome garage band anthems like We Are Tomorrow or Baseline.

If you have any further input, I’d be glad to hear from you.  Mr. Kurtz, any thoughts on what makes this band so distinctive?

Bleach are another staple of my teenage years, and this record has always been my favorite one out of their catalog.  A lot of their songs are just good time rockers like Almost Too Late and Fell Out.  However, they also hit on a ton of topics that were of mass appeal to my Christian upbringing, such as grace (Weak In The Knees) and persistence in the face of hardships (Knocked Out).  How about girls?  Do you think a nerdy good time rock ‘n’ roll  band may write some tunes about that blonde sitting across the way?  You better believe it.  I’ve always envisioned there to be a story line running through through the center of this record.  For me, it starts with Celebrate, when we meet this angel for the first time.  We fall head over heals for her in Found You Out.  Just check it:

Life is going swimmingly, isn’t it?  Isn’t it, Davy?  Yeah, maybe for a second.  But remember, for the tenth time, you’re a nerd in a rock ‘n’ roll band.  Our love story’s swan song is Said A Lot, and while it’s incredibly catchy, it can’t mask the bitter reality for every 15 year old who was obsessed with Garrett Hol’s “Nice Guys Finish Last” essay back  in 2000.  He’s got a letter jacket, and you’ve got a pencil behind your sympathetic ear.  You’ll hang on though; maybe one day that beauty will wake up and see what’s right in front of her face.  Until then, stick to your guns.  There’s more important things in life.  They’re outlined in Andy’s Doin Time and Knocked Out.  Listen for yourself to get the full picture.  The lyrics are only complimented by the music, which is defined for the millionth time in this writing as rock ‘n’ roll, with an extra touch of Weezer-esque mentality that make it unique to anything else out there.

But for those of us that want to keep it lighthearted and brokenhearted, look no further than my favorite track, Broke In The Head.

You haven’t said a single thing / The whole way home
The air is thick from awkward silence / So you turn up the radio
And I don’t think I’ve got to tell you / I hope you already know
What you reap is what you sow..

Don’t walk away from me!  I Looooooove you, can’t you seeeee?  Come back, come back!  Aw, you make me so sick!  Get away from me!

Bleach love to give us the awesome teenage love anthems along with the issues of the heart.  Spiritual, hormonal, personal.

If you had to listen to two tracks:  Broke In The Head / We Are Tomorrow

One response to “Bleach – Again, For The First Time”