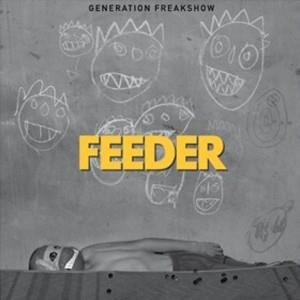 Feeder is my absolute favorite band, and they have been ever since 2001 when they released the phenomenal Echo Park.   What’s more is that they consistently release great records – I can’t say that they’ve had a misstep their whole career.  Generation Freakshow is no exception.

Lead single Borders is fantastic in its varying dynamics.  Musically, it has a super-simple, insanely catchy layout, but the lyrics are full of the complexity of a girl who just can’t stay in one place for too long before she starts yearning for something different.  Idaho is Grant’s tale of meeting a girl in some overseas land called “Idaho”, and he can’t get her off his mind.  It’s a treat for us here in the USA, since Feeder is from Wales, and to them, Idaho is some far-off place.  What U.S. band would write a song about the spud state anyways?  Hey Johnny is a wonderful tribute to Jon Lee, their original drummer who committed suicide in 2002.  It’s also worth noting that over the years, Grant has always been able to reach deep inside himself and find some incredibly moving lyrics dealing with heartbreak, and at least one track on each record is dedicated to this emotion.  On this record, Quiet is a pure standout in this category.  You can really feel the silence he is singing about.  Tiny Minds sees them channeling the Foo Fighters, and In All Honesty brings out the punk-pop perfection.  There are too many standouts on this record to mention.  It’s a super catchy one from start to finish.

If you had to listen to two tracks:  Borders / Quiet